On view until April 26th, the Grand Rapids Art Museum will be hosting the exhibition A New State of Matter: Contemporary Glass. Along with nineteen other contemporary artists, the exhibit showcases the work of Grand Valley State University’s Associate Professor, Norwood Viviano. Each artist approaches glass from a variety of different practices and conceptual points of view to expand and connect their pieces to a broader set of themes.

The exhibit includes two pieces from Viviano’s larger series Recast, which explores the evolution of cities and how closely tied they are to the arc of their manufacturing industries. The GRAM is excited to debut his newest piece Recasting Grand Rapids, which incorporates the current cityscape with a wooden side-table that was built by Imperial Furniture Co. in the 1940s. Recasting Detroit will also be on display, depicting the cities current architectural infrastructures upon a Detroit 1960s engine block, all which are recast in clear glass. 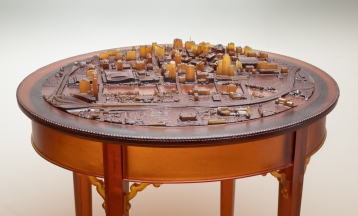 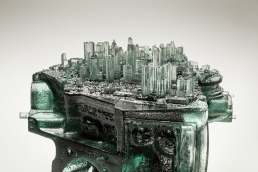 Viviano primarily produces his work through glass blowing and casting processes. He commonly pairs the two with digital 3D modeling and printing technology. His admiration for glass comes from the power that is embedded in the medium; from its fragility to transparency and density, the art form is like no other.

Norwood Viviano’s pieces will be on display until April 26th at the Grand Rapids Art Museum’s latest exhibition A New State of Matter: Contemporary Glass.